The 3 Steps to Crisis Ready for City Governments & Agencies

Prepare for crisis response in three steps with crisis strategist Melissa Agnes. Learn how Mountain View Police and others built trust that carried them through the crisis.

Melissa Agnes, a crisis management strategist and author of Crisis Ready, engaged a packed ballroom at ICMA 2018 in Baltimore by bringing her audience through the real world examples of backlash communications -- where governments and organizations are threatened to lose control of their narratives, and suffer the crisis response penalty.

When United Airlines took two days to respond fully to the viral video of a bleeding Dr. David Dao of Elizabethtown, Kentucky, as he was being forcibly removed from a Chicago flight to Louisville in April 2017, "it was a $700 million per day mistake," said Agnes. 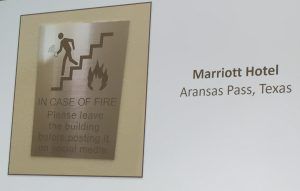 This crisis response penalty -- how Agnes calculate the monetary and reputational impact of a crisis -- is the short- and long-term impact of an incident as a direct result of mismanagement.

It kicks in quickly because social media provides everyone a way to voice and share their experiences immediately. One study, she noted, found that 28 percent of crises spread international within one hour. So powerful is the viral inclination that emergency signs, such as the one pictured from a otel in Aransas Pass, Texas, warns people to follow safety procedures before sharing an incident on social media.

Agnes has worked closely with government and public safety officials doing everything from issue management in a crisis, to developing talking points and advising on the tactical practices, implementation strategies and tools.

Crisis response is a real struggle because government leaders do not always have the information to give -- but the demand to act right away is there, she said. What's essential is “a good rapport with your community prior to any incident happening,” she told EfficientGov ahead of the conference.

It’s essential for local governments and agencies to build up trust with communities beforehand, so that when the crisis happens and the government or agency communicates, the community will:

Crisis ready is cultural," said Agnes. Even if there is a plan of action, the act of reaching for that plan is actually a disadvantage, because the crisis has already moved ahead of you.

Review the following three steps to getting crisis ready.

Governments risk losing the trust of citizens with the wrong approach to crisis response, as evidenced by one city that requested social media followers share their stories.

"People were engaging, just not in the way they'd hoped," Agnes explained. When the city called her for help, she said "What a great opportunity."

The city's choice was to ignore it, or shut it down entirely, but they risked further broadcasting of negative feedback. "So we decided to choose a different lens," she said. The city responded that they would take the five most common grievances and over the course of 12 months, would work to remedy them and engage the public throughout the process.

Choosing your lens is about auditing. Ask, 'What is your lens and how can your organization shift or augment it?'

To get prepared for something negative, ask stakeholders what they expect with various issues or crises.

Agnes said that crisis response is not always warranted -- "virality is not an indicator of crisis."

A crisis stops business as usual and threatens long-term material impact to:

Issue management may be required for a negative event that doesn't have long-term impact on those five things, Agnes said:

Defining crisis versus issue for your organization is an essential step."

Using the example of presenting the wrong winner at last year's Academy Awards, Agnes discussed with city managers and other local government practitioners attending ICMA 2018 that while it was a crisis for Price Waterhouse Coopers, the awards' auditing partner, it was not one for the Academy of Motion Picture Arts and Sciences.

To embed crisis ready into the culture of local government or agency organizations, ask:

And repeat the exercise with potential crises.

To get an organization crisis ready, it must practice issue management to "gain the benefit of the doubt" when an issue or a crisis strikes.

One agency that does an excellent job of this, according to Agnes, is the Mountain View, California, Police Department, featured in August 2018 on the cover of The Police Chief to show "what community-police engagement looks like."

When the public learned shortly after the multiple casualty incident at YouTube headquarters in April 2018 that the shooter had been sleeping in her car in Mountain View and engaged by police, the department had to wait one week to release their bodycam footage of the conversation.

Because they had the trust built up, the community waited," Agnes said.

According to the report, Mountain View Police spoke to the shooter's father after finding his missing daughter, and said he never told them she could become violent or posed a threat to YouTube employees. The family said they had told police that, but the cellphone calls were not recorded, according to the San Francisco Chronicle.

Along with the bodycam video, Mountain View Police expressed their protocol: “In this instance, if an individual is cooperative and does not present any sort of threat, continuing to unnecessarily question or delay them can lead to an unwarranted detention. As such, our officers are constantly cognizant of this dynamic and, in this context, look to strike the balance between investigative police work and maintaining the civil liberties of those that they contact.”

Agnes said the Mountain View community largely accepted the police's story about the incident because the department had built up trust beforehand through regular outreach shared through their social channels:

Checking speeds around MV to ensure 🚗 are able to 🛑, slow and go safely as drivers get around town today 👌 pic.twitter.com/Dvkb1I7VZI

No means no. Educating and empowering women this weekend in our RAD class. All women should have the opportunity to feel and be safe, no matter what. #SaturdayMorning pic.twitter.com/UKPM1hzwkp

In establishing trust, a community can come to rely on an agency or government as a credible source of information.

That's also what happened with the Boston Police Department during the 2013 Boston Marathon Bombings -- the department had positioned itself early, she told EfficientGov. "That's extremely hard to do."

According to Agnes, public safety agencies and other organizations contact her regularly to let her know they rely on her issue management response flowchart tacked to their walls. Review and download here: