With the increased amount of large-scale incidents and major disasters from fire, flood, and weather in recent years, proficient emergency communications have become even more significant than ever. But what happens when a 911 Public Safety Answering Point (PSAP) becomes overwhelmed by the sheer magnitude of incoming calls during a disaster?

To address this need, Telecommunicator Emergency Response Taskforce (TERT) programs began developing at the state level in 2001 and by 2005 became credentialed by the National Incident Management System (NIMS). By 2017, 23 states had active TERT programs. Public safety dispatchers who qualify for these teams must complete FEMA-certified training courses and have authorization from their home agencies to deploy. Since the program was formalized in 2009, dispatcher mutual aid teams have responded to dozens of major emergencies – from East Coast hurricanes to West Coast wildfires. Their efforts have been shown to be critical during numerous recent disasters, and TERT dispatchers have been recognized as an essential support resource to incident management. 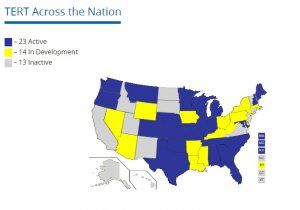 The Need for Dispatcher Mutual Aid

“Historically, nearly all areas of public safety have had some type of mutual aid program,” said Jonathan Jones, a 12-year veteran of emergency communications and currently the operations coordinator for the Athens-Clarke County 911 Center in Athens, Georgia. “911 communications did not. There was no one for a 911 center to call when it needed help.”

The concept of large scale PSAP mutual aid had been used in Florida following Hurricane Andrew in 1992, which resulted in a formal program within the state in 1993. But it took another decade before the concept was established as an active resource, and then embraced on a national level.

The state of California began to develop its TERT in 2017, and the state’s fledgling team experienced its first trial by fire, literally, during 2018’s devastating “Camp Fire,” assisting local PSAPs as the deadly inferno exploded across Butte County, turning day into night and reducing the town of Paradise to little more than ash. Over a four-week period, 144 dispatchers from 30 different agencies were deployed to assist at PSAPs and the Incident Command Post (ICP), as well as subordinate Search & Rescue bases and at the animal rescue ICP.

In 2001 the first emergent TERT program had been developed in the aftermath of 9/11 by members of the North Carolina Chapter of the National Emergency Number Association (NENA). In September 2003 NC TERT deployed 19 telecommunicators to assist in four counties in the aftermath of Hurricane Isabel; further in-state TERT deployments were made in 2004 and 2005 to assist with hurricane-affected PSAPs. NC TERT’s first out-of-state deployment came in 2005 with Hurricane Katrina, to assist St. Tammany Parrish, Louisiana for 10 days.

The lessons learned in these early experiences helped to provide guidelines that refined and solidified the ensuing TERT programs during their establishment. Among the concerns encountered by TERT during the Hurricane Katrina deployment were these:

In response, TERT met with DHS and FEMA officials and discussed solutions, which led to the program being credentialed through NIMS (National Incident Management System), the establishment of training standards and the availability of funding through the Office of Domestic Preparedness.

The result was the creation in 2006 of the National Joint TERT Initiative (NJTI) through the partnership of NENA and the Association of Public-Safety Communications Officials-International (APCO International), which became the national governance body for TERT, although individual states have their own coordinators and leadership. In May, 2009, NJTI’s Model Recommendations for TERT Deployment were approved as a standard by the American National Standards Institute (ANSI). 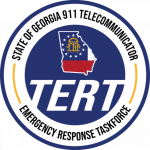 “Initial deployments proved the need for a mutual aid response concept for 911 Centers,” explained Jones, who also serves as Deputy State Coordinator for Georgia TERT, and is a board member on the National NJTI committee,. The Georgia TERT program currently falls under oversight from the Georgia Emergency Management Agency and Georgia Chapters of APCO and NENA. The state’s TERT members must complete the FEMA IS-144 TERT Basic Course (developed in 2013 with NJTI), as well as Basic ICS and NIMS courses. TERT Dispatchers must also have the approval of their PSAP supervisor to be considered for assignment to a team.

Last year, eight TERT members deployed to Sampson County, NC, for Hurricane Florence, and last October, 13 were deployed from five different in-state teams to various areas in South Georgia. “These deployments continued to validate the importance and need for organized TERT programs,” Jones said. “But to that end, it reiterated the importance of considering requests for TERT teams sooner rather than later. TERT needs to be on the list of things to consider in planning, not after an incident has already occurred.”

Thinking Ahead on TERT

Jennifer Verber, a dispatcher for North Richland Hills PD in Texas, participated in Texas TERT’s first in-state deployment in 2008 to Hurricane Ike, which was published on the NJTI’s website:

…As we entered Reliant Stadium [in Houston] through a back gate we rolled up to the Montgomery County Hospital District’s command bus, the hub of communications for Reliant Command. After we got our briefing, half of us went on shift while the other half bedded down inside the bays where the ambulances were staging and [awaiting] dispatch. I worked through the night and into the morning until the afternoon when I got another call from Galveston County Sheriff’s Office. We packed up and ventured south yet again,” she wrote about her experience for NJTI.

According to the NJTI, the duration of TERT responses have averaged multiple days to weeks for PSAP to PSAP deployments, while field deployments of TERT-member Tactical Dispatchers to ICPs and the like have ranged from less than 18 hours to several days.

“We did not want to rush into creating this program,” said Jamie Hudson, dispatch supervisor for California’s Elk Grove Police Department, with 26 years of law enforcement dispatch, who assumed the role of Acting State TERT Coordinator. “We knew the program needed to be comprehensive, but also that there were some unique deployment circumstances we would have to plan for. For instance, California agencies have been using field-deployed Tactical Dispatchers significantly in the past 20 years. We felt there needed to be an element for these resources included in this program.”

While California, with its newer TERT program, has the potential staffing of 7,000 public safety dispatchers across 58 counties, their PSAPs have routinely maintained minimum staffing levels and could not easily commit dispatchers to a one or two-week deployment. “Because of this,” Hudson said, “we needed to create and test models where mutual aid is brought in by individual shifts on a commuting basis as much as possible. This allows them to respond [with pay] on a day off, as opposed to creating significant staffing impacts at their PSAP.”

These experiences have all proven the TERT concept’s merit, and there are more than a dozen states reported to have teams in development.

#1 Learn From the Framework

Jones recommends NJTI’s easy-to-follow framework for establishing a TERT program. “While considering the unique needs of Georgia, we felt it was very important to not completely deviate from the original mission of the NJTI, while having some variances based on regional or state need,” he said.

#2 Bring Everyone to the Table

represented on the creation committee. “This allows a broad spectrum of potential needs to be addressed,” he said. “We also determined our state needed a Tactical Dispatch element as well as a commutable response element to deployments.”

Jones sees continuing expansion of the TERT initiative throughout states and regions that don’t currently have such a program, or lack support for developing one. “It’s worth it to take the necessary time and effort into building the program,” he urged.

“Utilize 911 professionals from a variety of levels – line-level, supervisors, managers/directors, and so on. Involve your state associations – APCO and NENA chapters and your State Emergency Management Agencies. Understand EMAC and its reimbursement process. Reach out to agencies that have experienced the need for TERT to reveal where improvements can be made. Build TERT education into conference sessions in your state. We could not have gotten to the point we are currently at without the help of several TERT coordinators around the country, willing to share their manuals, MOUs, lessons learned, and other resources.”

Learn more about TERT and how to develop a team on the National TERT Joint Initiative website.