In late 2017, Police Chief John Lane, City Health Director Carol Cowan and I got together and decided to put on a “Movie Night” in different neighborhoods throughout East Liverpool, Ohio. 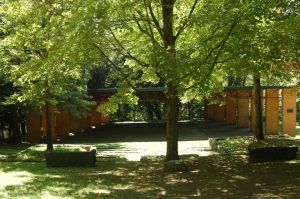 I had a friend who owned a blow up movie screen and projector and we borrowed that, and the health department ordered the movie with the copyrights to have for a week. So we set out to pick a good location within the community, and decided to put it on at Thompson Park.

The response was overwhelming, we were able to provide free popcorn and snow cones. Kids from all over the city came along with brothers and sisters, moms and dads. Director Cowan offered health department information and Chief Lane spoke to the group and answered any questions before offering the movie.

We did this again approximately a month later and set up in the East End of the city. Again, the families came. In our minds we wanted to bring something to areas of the city that might not normally get to attend an event of any kind.

Showing the current movies was just the thing.

A City on the Edge of Post-Industrial America

At one time it was the Pottery Capital of the World hosting 200 different potteries, with them the steel mills made most of our trades. We have several great museums located here, like the Lou Holtz Museum, the Ceramic Museum, Police and Fire Museums to name a few. East Liverpool is known for the involved capture and killing of notorious 1930’s bank robber, Charles "Pretty Boy" Floyd.

Over the years, however, our community has declined, as have many others. We have our share of problems; drug abuse seems to rule at times -- it’s a continuous battle. We will never be the city we once were, but there is no reason we can’t be great at what we are.

One of our greatest attributes is our ability to connect to our children, from school sporting events to our community movie nights. The relationships between our police officers and our locals are by far one of our best attributes. We recently adopted the “See Something, Say Something” campaign which has worked very well with our tip line.

We are looking to try and purchase our own equipment to be able to continue the Movie Night with the idea that if we had our own we would be able to reach more neighborhoods throughout the summer months and maybe even indoors in the winter months also sharing important health information for example (availability of flu shots, inoculations)

If you will try and picture this for a moment: it’s five o'clock in the evening, most families are eating dinner or just getting done, all of a sudden a group of police cars are in the neighborhood, they begin blocking the street and getting out of the cruisers and instead of the fear of what might be happening, the kids are excited that they are there, why?

Because their block got picked for Movie Night.