A Call for Help: Uncovering Locations With High Rates of Sexual Assault

Sexual assaults are among the most under-reported and under-researched crimes in the United States. According to the National Sexual Violence Resource Center, 63% of sexual assaults are not reported to police, which makes it difficult to find accurate information on an important topic.

And, for crimes that are documented, the methods of collecting information and subsequent research on the topic vary in reliability.

For example, before the Center for Disease Control launched its National Intimate Partner and Sexual Violence Survey (NISVS) in 2010, the most recent detailed national data on sexual violence was collected during 1995–1996 in the National Violence against Women Survey. And though the FBI’s Uniform Crime Reporting (UCR) Program started collecting statistics on rape in 2008, the FBI definition of the crime changed in 2013, and then they stopped consistently reporting in 2017, which weakens the UCR Program data. 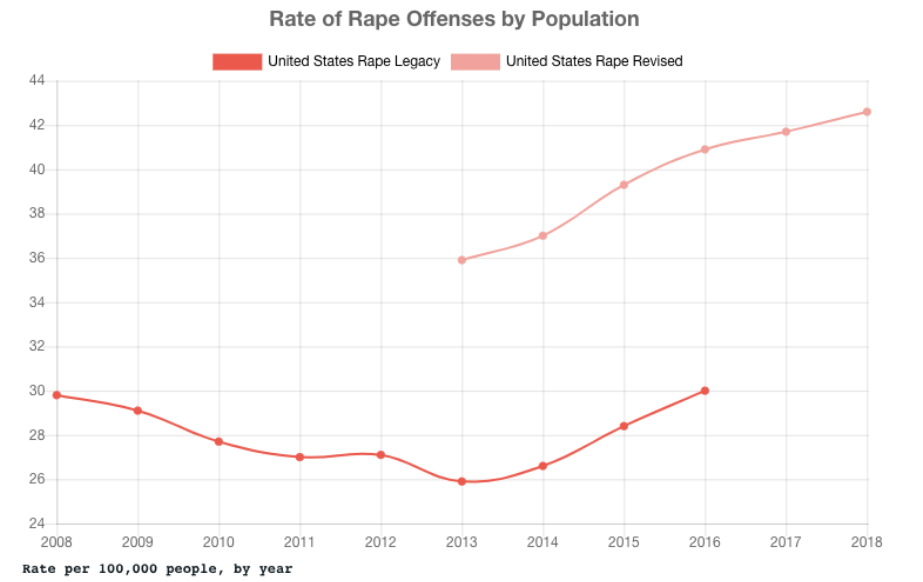 Though there is much room for improvement in how data related to sexual assaults is collected and analyzed, the importance of the topic remains the same. Shedding light on the information that we do have and the resources victims can utilize is as critical as ever.

Below, we’ll discuss unnerving findings on sexual assault, based on location.

Year-after-year, Alaska ranks as a state with above-average violent crime according to the FBI's Uniform Crime Reporting surveys. 2012 crime reports showed that the rate of rape in Alaska was nearly 80 per 100,000 residents, which is almost 200% higher than the national average of 26.9. According to the National Coalition Against Domestic Violence, the rape rate in Alaska is currently 2.5 times higher than the national average.

Work published by ProPublica and Anchorage Daily News shows that residents in Alaska face several issues when it comes to defending themselves from sexual assault and reporting the crime after an attack:

Additionally, according to one story written by Propublica, for victims who decide to report their attack, the process is tedious. In remote villages of Alaska, victims are told not to shower, and then fly hundreds of miles to undergo a physical examination and interview, because rural clinics cannot effectively conduct rape investigations.

According to 2019 data from Statista Research Department, which highlights 50 cities in the United States with the highest rates of sexual violence, 10 cities in Michigan are recorded with disproportionately high rates of sexual crime.

Experts believe the high profile case of Larry Nassar, a former USA Gymnastics and university sports-medicine doctor who victimized over 300 females during his tenure, and increased media attention on the #MeToo movement could have acted as a catalyst for more victims to come forward about their own stories.

Despite high volumes sexual crimes throughout the state, the most recent data shared by Michigan State police was in 2017. That year, there were 12,096 sexual assault-related offenses reported to law enforcement.

According to the same 2019 Statista report, Texas had eight cities that ranked as the most sexually violent in the United States, including:

In a city not identified on this list, San Marcos, home to Texas State University, made headlines earlier this year for finding discrepancies in the number of sexual assaults that occurred on its campus during the 2016-2017 school year.

In its initial report, the school stated there were eight rapes during that time, whereas the revised study showed there were 38 and one separate case of statutory rape.

In August of this year, Texas implemented new laws geared toward making it easier for assault victims to have fair treatment in the justice system and strives to improve how law enforcement officials handle sexual assault cases. Specifically, this includes new legislation around:

According to Colorado.gov, the prevalence of sexual violence for women in its state is 23.8 percent, which is higher than the national rate of 18.3 percent. Data from Statista supports the statistic by showing four cities in the state with higher than average numbers of sexual assaults.

Though rates of sexual violence in the Centennial State are high, arrests are few and far between. In 2017, Colorado authorities made an arrest for every 2.5 violent crimes reported. But for rape, they made only one arrest per eight reported crimes.

Though the figure is frustratingly high, when compared to the national rate, Colorado may shine a bit of hope. According to data from the Rape, Abuse & Incest National Network (RAINN), for every 1,000 sexual assaults that occur across the nation, only five attackers will be sentenced with jail time.

Though New York only had one city on the list of 2019 data from Statista, the location is an important one to highlight.

In August of this year, the curtain was pulled back on a years-long sexual assault scandal against the Rome City School District, the Boy Scouts of America and the Roman Catholic Diocese of Syracuse.

On the first day the story broke, 427 cases were filed across the state, though the true number of victims is likely much higher. An Associated Press report notes that a compensation fund for sexual abuse victims set up by the New York Archdiocese in 2016 has already paid out $65 million to 323 people, who have waived their right to file lawsuits in the 2019 suit.

Upstate is not the only location in New York with sexual violence. In a 2017 global poll conducted by Thomson Reuters Foundation, New York City was ranked as one of the most dangerous cities for women in the world, in part due to the risk of sexual violence, including rape or sexual attacks and harassment.

When it comes to reporting on sexual assault, it’s dangerous to compare the crime rates across states without considering additional factors like:

Below are additional statistics that continue to highlight the severity of sexual assaults in the United States.

As you can see by the locations and stories mentioned in the state profiles above, sexual violence on campus is pervasive. According to data by RAINN, 11.2% of all students experience rape or sexual assault through physical force, violence or incapacitation.

All students should feel safe and supported on their campus. For resources to assist with sexual assault on campus, click here.

The newest data on sexual assault from the CDC entitled ‘Prevalence and Characteristics of Sexual Violence, Stalking, and Intimate Partner Violence Victimization’ shows there are notable differences in sexual assault victims based on ethnicity and gender as well.

Women who have reported sexual assault:

Men who have reported sexual assault:

If you need resources to protect yourself from sexual assault, or to deal with the physical and mental injury after an attack, please contact the National Sexual Assault Hotline at 800-656-HOPE (4673) or the National Domestic Violence Hotline at 800-799-7233.

Megan Wells is a data journalist and digital content editor based in San Francisco, California.

Are cities people, too? Ohio city argues for restitution over false 911 report

Report: 1 out of every 4 San Quentin prison inmates have COVID-19