The interview is the victims’ time to tell their stories, but it may be years since initial police reports were filed. Training can help law enforcement investigators navigate between recreating reality -- and avoiding re-victimization -- during cold case sexual sexual assault interviews.

Satinsky and Simmons discussed the neurobiology of trauma, how to set up and conduct thoughtful and effective victim interviews, build rapport and ask better questions.

"We’re not real good at figuring out victims,” Satinsky said about police investigators, as he explained that interviewing a cold case sexual assault victim requires an entirely different approach than suspect interviews.

#1 Do all the background work:  Satinsky said that investigators need to not only read the case reports, but also speak to responding officers, if possible, and review all evidence and all criminal histories associated with the case, including the victim’s, before contacting the victim. The knowledge will help investigators to prepare victims and build a rapport with them. Knowledge shows that investigators are genuine, and it's essential to gain their trust.

“Have a plan prior to making your notification,” Simmons said, suggesting that departments establish a protocol. “Face-to-face notification reduces anxiety and provides a personal touch,” she said.

Satinsky advised being careful in reaching out to others when trying to locate a victim, because victims often don’t talk about their assaults.

#2 Build a rapport: “Let’s be honest, they may not have had a very positive interaction with law enforcement their first go-around, for whatever reason,” said Satinsky. With victims, let them decide where the initial greeting should be, whether it’s a local coffee shop or restaurant or the local justice center – wherever the victim is most comfortable.

Some agencies think the whole team needs to be in the room with the victim, he said. While that may eliminate the number of times the victim has to retell his or her story, that can be overwhelming. Satinsky recommends limiting the interview to:

Simmons added that everyone who is there should introduce themselves and state their purpose.

Investigators should let victims know the interview could take a while and allow them to take breaks, and should begin by engaging on relevant topics, gathering background information and asking about topics they care about.

#3 Use a different approach - Let your victim talk, reassure them you are not there to judge them, Satinsky said. Do not show “super command presence,” and make eye contact.

The primary approach is transitioning to open-ended questions – they are paramount for victim interviews:

The open-ended questions should be asked with an empathetic tone, and not be accusatory in style, Satinsky said. Victim disclosure comes over time, because victims are still processing (see Neurobiology of Trauma, below).

“We don’t want to make logical jumps,” he cautioned.

Victims may have more information after a few sleep cycles, he said.

“Those memories may come back up,” said Simmons. In Cuyahoga County, some of the cases were upwards of 20 years old, she said. In one case, the victim started therapy during the re-investigation, and subsequent interviews furthered the investigation.

The webinar also reviewed several strategies for asking better interview questions. Not “Why didn’t you …? Why did you …” It doesn’t matter why they didn’t stop drinking, Satinsky said.

Be careful not to interrupt the flow of the victim’s experience," he stressed -- even if what a victim is saying doesn’t make sense.

Trauma causes a victim’s memory to be fragmented, he reminded webinar attendees. “You get so many details when you just let them talk,” he said.

Follow up questions are okay -- especially when trying to clarify language. “If you don’t understand … don’t just shake your head,” said Satinsky. Here are some examples of follow-up questions:

“When you say that he gave you a funny look, can you describe that a little more.”

“You said there was a ‘tussle,’ can you describe that more?”

“You drank the shot he bought you?”

“Your friend was not there at that point?”

“Were your other friends there? Then, “Ok.”

Simmons noted that when alcohol is involved, investigators should be sure to ask victims about tolerance levels. Satinsky recommended avoiding pursuing drug charges:

I implore you not to arrest your victims for drug-related crimes,” and be sure to tell them you are not a drug officer to build rapport.

The sensory details in sexual assault cases are those “we weren’t taught to ask for before, or didn’t know what to do with it,” Satinsky said, noting that they serve to help prosecutors and investigators identify corroborating evidence. 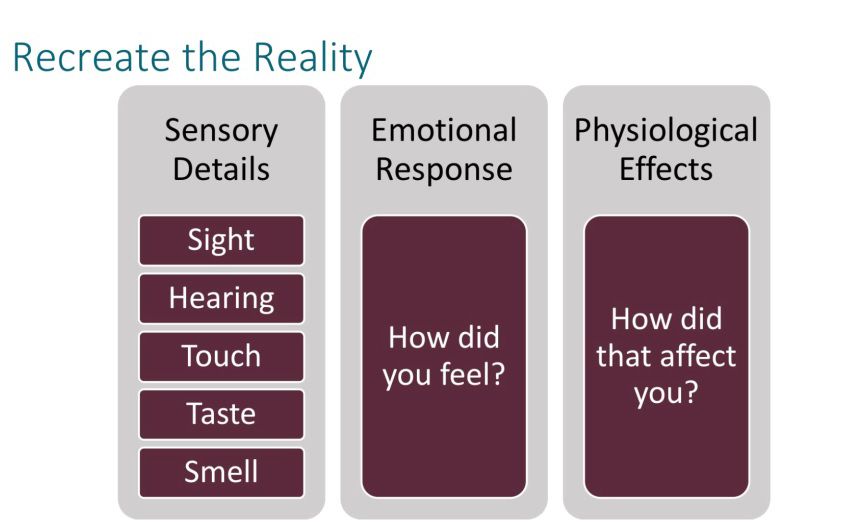 At the close of the interview, investigators should summarize what was learned, which helps reassure the victim he or she has been heard.

After a recorded interview, investigators should listen to it to catch any missed details, and also improve victim interview performance.

“This is one of the key tenets -- having that victim advocate with you,” said Satinsky, urging investigators to adapt to working with victim advocates.

#5 Reassure victims and provide services - When it’s not a serialized case, Satinsky said, give victims the power to decide which way the case goes. It could be they have a primary need for mental health services, more than a need to seek prosecution.

This is where victim advocates are essential – they engage in safety planning, along with rapport building and answering victims’ questions.  The victim advocate identifies and develops a plan to avoid triggering re-victimization or traumatic relapse, like drug addiction, and can address housing, counseling and other services.

“Cops are not therapists,” said Satinsky.

The Neurobiology of Trauma

To an untrained investigator, it may seem like a victim is lying. But victims often may just need one or two sleep cycles to “reboot,” Satinsky said.

“Police are taught to hunt for the truth,” he added, but investigators must rethink their approach with victim interviews based on the neurobiology of trauma.

The victim’s brain shuts down, affecting memory, he said. That is why it’s essential to build a rapport and trust.

Simmons gave an example of a victim that was picking at her hands for several minutes. Victims she has spoken with have relived the assault during interviews.

Bring them back to the present, and reassure them they are safe,” she said.

Victims can have array of emotions, sometimes many at once. Keeping them encouraged and engaged in the process can help alleviate emotions.

As investigators, it’s okay to apologize, the speakers said.

Laughter is a mechanism to deal with what they are talking about, just as flat speech might be. Victims may also exhibit unusual behaviors as they go back and recount their stories, like rocking back and forth. For some victims, crisis intervention services are critical.

Simmons said in one case, the victim being interviewed went to a corner and curled up in a fetal position. “Victims may respond in this manner.” Know when to give them space and understand that silence is okay, said Satinsky.

He said it‘s a very small percentage of victims that lie, and that sometimes it's because they are "face-saving." Make victims feel comfortable and reassure them you are not there to judge them.

When there are memory discrepancies with re-investigation, Satinsky recommended letting the victim reread their initial statements to police.

Satinsky recommended “The Neurobiology of Sexual Assault” a presentation by Rebecca Campbell, Ph.D., who was recently featured in the documentary, I am Evidence.

The webinar will be posted within 2-3 business days on SAKI’s website.

NAEMT: Governments have failed to provide funding, protection for EMS