Explore the top states for firearm deaths per 100,000 inhabitants and by total number.

Each year, the Centers for Disease Control and Prevention’s National Center for Injury Prevention and Control monitors birth, disease and death rates nationwide. But like many government agencies, data releases can take a long time.

In December 2018, CDC released its full Mortality Multiple Cause Files, including Firearm Mortality by State, for 2017. The information is so new that, as of today, it's not been used to update all of CDC's various state data information sources.

While mass casualty incidents and violence rates in 2018 could change the following Top 5 States for Firearm Deaths rankings, that information is not expected to be released until later this year.

The Top 5 States by the total number of firearms-related deaths are: 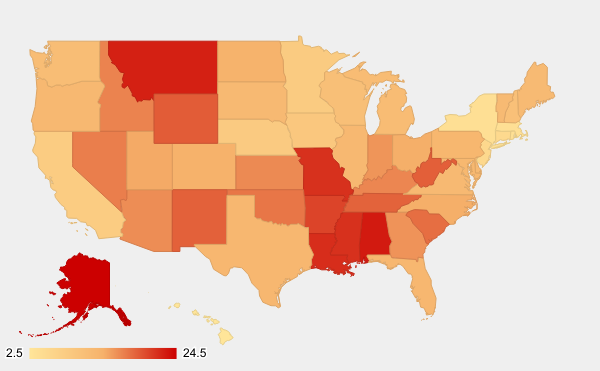 Access the source data and sort by rate, deaths or population to view further rankings on Google Docs.