Out in the field, wireless communications and data on building layouts can be critical incident command and officer safety challenges. Cutting edge broadband and cloud-based technologies offer solutions.

During the seminar, Wong and Politi examined the challenges of traditional indoor mapping, explored the future of FirstNet, LTE and LMR and presented a solution to mapping and tracking troubles that have previously made it difficult for public safety professionals to get an accurate picture of building interiors during emergencies.

#1 The demand for FirstNet LTE is huge -- and for good reason.

Communications systems that lag, jam or otherwise aren’t capable of transmitting data have no place in the public safety industry anymore.

“As public safety professionals, you know that you need a very reliable system to help you with your everyday job,” Wong said.

“For instance, I visited several fire stations in California, and what they told me was that in their trucks, they have maps of the buildings they go into. In order for them to have situational awareness, they need to have those maps transmitted en route. So you need a broadband system to do that. [That way] they can go into a building with a handheld that can give them a floor plan, or have a commander in the field say, ‘Hey, go here.’ That’s very useful.”

Communication systems are a public safety professional’s lifeline in the field. If you lose coverage -- whether it’s because you’re out of range, or you experience another issue, like GPS spoofing -- you’re at risk.

In fact, Wong said, coverage is one of the most important components of critical communications.

The next priority for Wong is reliability.

“We know LMR systems are very reliable, and we need the LTE system to be reliable as well. How many times have you driven on the freeway and you get a dropped call? Dropped calls are a hindrance in your personal life, but … in the public safety and critical communications realm, they are life-threatening.”

LTE might be public safety’s current hot topic, but LMR agencies can breathe a sigh of relief: those systems won’t be obsolete for a while.

“So now that I’m talking about LTE and the need for data and coverage, does that mean that everybody’s going to get a cellphone now, and your radios -- whether they’re P25, DMR or any other technology -- are going to go away? We think not,” Wong said.

This is for the sake of cost efficiency. According to Wong, many LMR operators have just completed analog to digital conversions, and it won’t make financial sense for them to update their systems yet.

That means companies will continue to produce and improve LMR technology for the foreseeable future.

“What’s likely going to happen is that LTE and LMR are going to converge and coexist for at least a decade or two,” Wong explained.

#4 Communications systems aren’t only for the field.

Wong cited a statistic her referenced from AT&T that claimed 80 percent of all wireless traffic either originates or terminates inside buildings.

Coverage mapping has traditionally been conducted manually, with personnel either noting their positions on a paper map, or perhaps on a tablet. But mapping a building with a pencil and paper can be subject to human error, and even tablets must be primed to the ideal screen resolution and tapped with immense care if the measurements are to be accurate.

Even if those conditions are ideal, however, there are still issues: limited amounts of data points and lack of geo-references make generating reports from multiple inputs extremely time-consuming, Wong said.

“Just to give you an idea of how long that process could take, we worked with a consulting firm that had to [map] 12 buildings on two sites,” he recalled. “They said it would take them normally two weeks to do that.”

The next step is automating indoor mapping, Wong said.

But it’s easier said than done. Enter TRX Systems, which specializes in GPS-denied location coverage, which locates signals indoors, underground and in areas where GPS is inaccurate.

TRX CEO Carol Politi noted that many agencies are also unable to map indoors because the available indoor locations solutions require extensive building preparation, such as installation, that just isn’t possible if you don’t own the building.

“There’s a lot of different technology out there to do locating, but if you’re going to go into a building and you don’t own or control it, and you don’t have days and days to map it out and install beacons, it’s really tough to get a dot on the screen,” she explained. “You need a system that allows you to track without that building prep.” 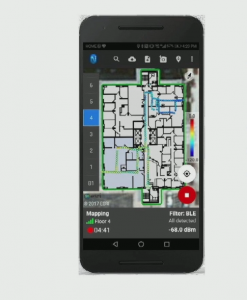 The TRX system is the NEON Signal Mapper app, which Politi said provides an Android smartphone user interface to give location and take measurements from a measurement instrument like Anritsu’s S412E.

“Inside a device like this you’ve got accelerometers, gyroscopes, compass, pressure sensors. Those integrate with an Android device -- either a tablet or a cellphone -- which also pulls data from your spectrum analyzer,” Politi explained. “Then if you want to look at data on a 3D map, or if you want to create a 3D map, a cloud-based service is pretty convenient. You don’t have to use the cloud, but the cloud is really helpful because it lets you validate in real time. It also lets you create maps before you go to a site, download them to the Android device, store them and then automatically use them on site.”

“The first thing we did was take the sensors and instead of leaving them in the cell phone, we put them in something body-worn,” she said. “That way, we can model your motion and we don’t have to worry about what the device is doing. The device might be doing something different than you, but because you’re wearing it on your belt or wherever, we can be assured that the sensor is modeling your motion.”

“Before you visit a site for signal mapping, there’s a tool that lets you create a map of that building, and pull floorplans in if you have them. Just having that exterior shape of a building helps you mitigate a lot of those sensor errors. In other words, as you’re walking around knowing you’re in a structured environment, you can infer things from the building like, ‘I don’t think that person’s going that way, that’s really just drift, they’re going this way.’ And that’s hugely powerful, having that.”

A manual check-in capability provides an extra measure of accuracy.

“You can also look at where you are compared to landmarks and check in and do an update. If you check in on the map, there’s a capability where you can re-process all that path data going back and saying, ‘Okay, that person was five meters over, they checked in over here,’ and instead of having to check in at every point, it just goes bath and corrects that path all the way from the last check-in.”

A fused signal mapping solution -- instead of GPS, which is largely inaccurate indoors, and in lieu of inertial sensors -- provides the final layer for the most accurate indoor track.

“You can upload the data and look at it even before you leave the site,” she said.

Lexi Wessling is a freelance writer completing criminal justice studies. She has worked as a writer and copy editor for more than seven years.