Vancouver CTO Jessie Adcock leads IT efforts to empower city leaders with the data they need and refresh back office operations.

Vancouver, British Columbia, is one of Canada’s largest cities with a population in the city core of more than 630,000 and another 2.4 million people living across the Greater Vancouver region. Vancouver is surrounded by snow-topped mountains and ocean, and is one of the most photographed cities in the world. Beyond its physical attractions, “Silicon Valley North” has become one of the top tech hubs in North America.

As Vancouver's Chief Technology Officer, Jessie Adcock is focused on how the city's data can empower her colleagues in making effective and timely decisions and better serve civic operations for residents and staff.

How has IT in government evolved over the last decade?

Adcock: Hardly any aspect of IT in government has been spared from the disruptive effect of digital technologies. IT departments have been impacted across the full spectrum from how roadmaps and technology decisions are taken to how technology is procured, project management models, operational methods, infrastructure design, solution design and development, internal and external service delivery, team structures, skills, engagement models with the business.

Every aspect of IT has warranted a fresh look.

As a technology leader working within the public sector what specific technologies interest you?

Adcock: Anything to do with data – how to make it more accessible to the public, to staff; how to deal with the copious amounts of it; how to visualize it, how to enable co-existence of data that has existed for decades with new forms of data.

My emphasis has always been on increasing the extent to which data based decision making is possible and empowering people by putting the right data in their hands.

Can you describe innovative examples of your government utilizing technology?

Adcock: One major enabler of transformation and innovation has been driven by the rollout of our city app. 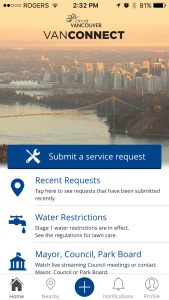 While the app -- as is the case in most cities -- initially started as a mechanism for automating the reporting of service requests to the city, it has now become a major driver of change in both how we deliver services but also in how the back office operates.

As users continue to shift their interactions with civic government to digital channels, they want more and more to be available to them from their mobile phones. As a result, we’ve seen major momentum in back office transformation as a way in which to enable online service delivery. We’ve also been able to innovate how we communicate and engage during emergencies, events and consultations and have sought out ways in which to make our open data accessible for consumption. The app and digital philosophy has been a game changer.

VanConnect's core function is to report issues anytime, anywhere that the city can track and fix. The app uses the phone's camera, location and notifications so reporting issues is fast and easy. We choose the issues that people can report in VanConnect based in part on the volume of phone calls those issues drive to our 3-1-1 Contact Centre. We simplified the user journey to report these issues by replacing business jargon with plain language and reducing the amount of questions we ask. On top of that, we routinely update VanConnect as a hub of useful and timely information. For example, our public awareness campaigns (summer watering restrictions, Bike To Work Week, Empty Homes Tax and storm-related flooding), holiday hours, recreation facility locations, road closures, bike routes and public meetings are included. When implementing or adopting new technologies what challenges have you had to overcome?

Adcock: The biggest lesson for me is that digital transformation is about people much more than it’s about tools, processes or technologies. Buy-in from your people and an adjustment in organizational culture are the pre-requisites to implementing and adopting new technologies. This is especially important in government where you have a fairly stable workforce.

EfficientGov’s CTO Download column highlights the work of civic IT leaders that achieve notable, forward-thinking technical solutions that change the game for their local governments. Who they are, what they believe and their approaches advance cities governing under limited resources.

Those without broadband struggle in a stuck-at-home nation